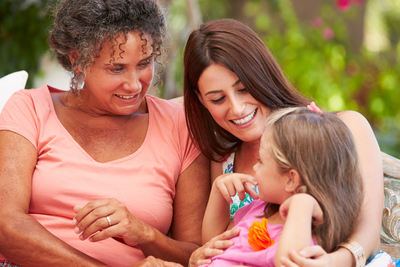 As minority language-speaking children learn English, it is only natural for them to mix the two languages. I've even heard my nieces, who have an Arabic-speaking father and Spanish-speaking mother, use three languages in one sentence. What should parents do when their child is fluent in Spanglish?

Is it ok for children to mix languages?

Mixing languages, also called code switching, is a normal part of the language learning process for children in a bilingual household. Young children are still learning which words that they've heard belong to which language. To help them sort it out, it is important for the adults around them not to code switch when speaking with them. Adults should model a clear separation of the two languages ideally by people, but you can also separate the languages by time or place. For more information, read Language boundaries - What kinds of limits to set in a bilingual household.

What to do when your child mixes languages

When a young child inserts a word or two of English into the other language, don't scold them or make them feel that they've done something wrong. Mirror back to them what they said with the correct word in the target language. For example, if they say, "Quiero una apple." (I want an apple) say back to them, "¿Quieres una manzana?" (Do you want an apple?). You're letting them hear the word in the target language in a way that sounds like you're comfirming that you understood them correctly.

Why do children mix languages?

As children get older, they may begin to favor English over the minority language because that is what their friends at school or in the neighborhood speak. As this happens, you'll notice English slipping into the minority language. As a family, you'll need to decide if this is acceptable. Some families create a penalty system similar to the "swear jar." If someone in the household (parents too!) breaks the family language rules, they need to put a quarter in the jar. The family language rules may be to only speak the minority language in the home, with each other, or when they are not in the presence of people who don't speak the language. You need to decide together what the rules are going to be.