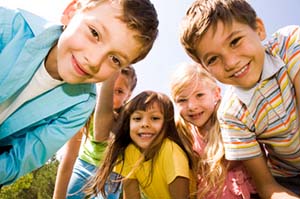 Just as babies begin by listening before they can actually produce speech, children who are second language learners generally have a silent period called the preproduction stage. This stage of second language development involves primarily listening and using gestures or their first language to communicate although they may be able to produce some words.

In this stage the children can produce single words and short phrases. Again, they will understand a lot more language than they are able to produce.

In this stage the child will begin to speak in sentences. They may be able to hold a conversation and will be more easily understood. Sentences may not be grammatically correct, but they can communicate through simple sentences, phrases and questions.

This is a high level of language development. The child is now quite fluent and able to hold a conversation but will still make minor errors. Sentences are more complex in this stage and may involve clauses and

At this stage the child is considered to be fully bilingual although they still may make an occasional error.