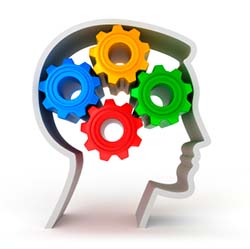 Many people know that bilingualism can open doors for children, but did you know that it can actually make them smarter? Bilingualism has been connected with the following cognitive benefits.

Dealing with two languages is like a workout for your brain. This mental exercise helps children develop skills that will help them in school and life. Executive function is a set of cognitive skills that is used to control behaviors in order to meet goals. Bilingualism has been shown to develop the following executive function skills.

Bilingual children are constantly assessing which language they need to use in each context and suppress the language that they don't need at that moment. This control over language is an executive function which can transfer over to other situations that require inhibitory control such as tuning out distractions when trying to learn something in class. This skill helps children have the self-discipline needed to work towards their goals.

Because of the increased mental processing of dealing with more than one language, bilingual children have a larger working memory. They can hold more information in their brain than monolingual children. This not only helps them store more vocabulary in both languages, but it also helps them study for tests or manipulate numbers in their brain while solving a math problem.

Bilingual children are used to seeing things in more than one way. When they see a book, for example, they can see it as a "book" or "libro" ("book" in Spanish). This cognitive flexibility transfers to other areas including creativity. Flexibility is a key to creativity because you need to be able to think of new ideas and see things in new ways in order to be creative.

Bilingualism can even help slow cognitive decline with aging. Bilingual patients with Alzheimer's showed symptoms four to five years later than monolingual patients. It is believed that this is because bilingual people have an improved "cognitive reserve." This means that they have a more efficient use of their brain network. Their brain stays sharper longer by using alternative brain networks to compensate for those that are damaged by aging and disease.

Scientists are continually discovering more and more benefits to bilingualism and multilingualism. Raising a child with more than one language has been shown to improve performance on both verbal and nonverbal intelligence tests. Give your kids an edge in their future academics and career by exposing them to a second (or third) language now!